Black Panther Soundtrack Is Getting New Music from Kendrick Lamar Black Panther Soundtrack Is Getting New Music from Kendrick Lamar

Kendrick Lamar is one of hottest MCs in music today and the MCU’s Black Panther is reportedly about to get some original music from the rapper. When the first trailer for the movie launched back in June, one could almost hear Lamar’s music in the beats of the edits, like they cut it to his hit song “Humble” off of his latest album entitled Damn. The Grammy Award winning rapper has been rumored to be working on Black Panther for a few months, but he may have just confirmed the news in an Easter Egg for his new video for the song “Love.”

Music from Vince Staples and Run the Jewels have been shown in the trailers and TV spots for Black Panther and the addition of Kendrick Lamar could end up for a pretty epic soundtrack. The reveal came in the form of a quick shot in the middle of the music video for his song, “Love,” when a flash of an image says, “B. Panther Soundtrack Coming Soon.” This isn’t the first time Lamar’s music has been connected to the movie. His hit single, “DNA” was featured in the Black Panther footage shown at this year’s San Diego Comic-Con.

Kendrick Lamar appears to be a perfect match for the movie. Director Ryan Coogler and star Chadwick Boseman are huge fans of his, which led to the use of “DNA” in the footage that was originally shown at San Diego Comic-Con. Coogler had this to say about the choice of using “DNA” in the Comic-Con footage.

“The lyrics are amazing; a lot of Kendrick’s are. It’s actually oddly literal for our trailer’s purposes, and I think a lot of the cultural things we’re dealing with in Wakanda are in the zeitgeist in the African American community.”
It’s not often that MCU films feature original songs, but, some do include pre-existing songs. Iron Man 3 used Capital Cities’ “One Minute More,” while Guardians of the Galaxy utilized a plethora of classic tracks and Thor: Ragnarok used the mighty Led Zeppelin’s “Immigrant Song” to great effect. It will be interesting to see what Lamar and his producers have cooked up for the Black Panther soundtrack.

Kendrick Lamar is already one of the best-selling musicians in the world and the rapper recently claimed that hip-hop culture determines “what’s cool and what’s not cool”. Lamar has a deep-rooted love of hip-hop culture and he believes it is the most influential genre of music in the United States. Kendrick Lamar recently said, “You can debate me on this all day you want. We say what’s cool and what’s not cool. We say what we like.” This attitude seems perfect for the look and the vibe of Black Panther and the match could prove to very fruitful for Lamar and the MCU.

2018 is going to be a big year for Kendrick Lamar. Black Panther hits theaters on February 16th, 2018 and he nominated for multiple Grammy Awards again for Damn. Black Panther is already tracking for a massive opening, so the stars seem to be aligned for both Lamar and the MCU. There haven’t been any hints as to what Lamar’s new song for Black Panther will sound like, but considering the music he’s known for and the theme of the movie, it’s not too far of a stretch to expect something important and groundbreaking. You can check out the video below as well as still showing the Black Panther information via Ronald Isley’s Twitter account. 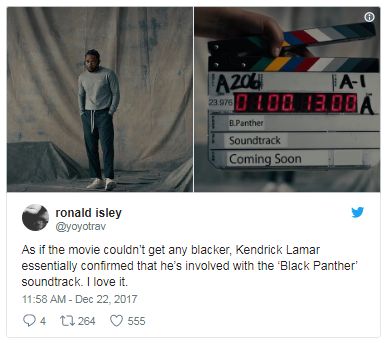