He-Man Vs. Thunder Cats: The Fight Of Your Dreams Is Here 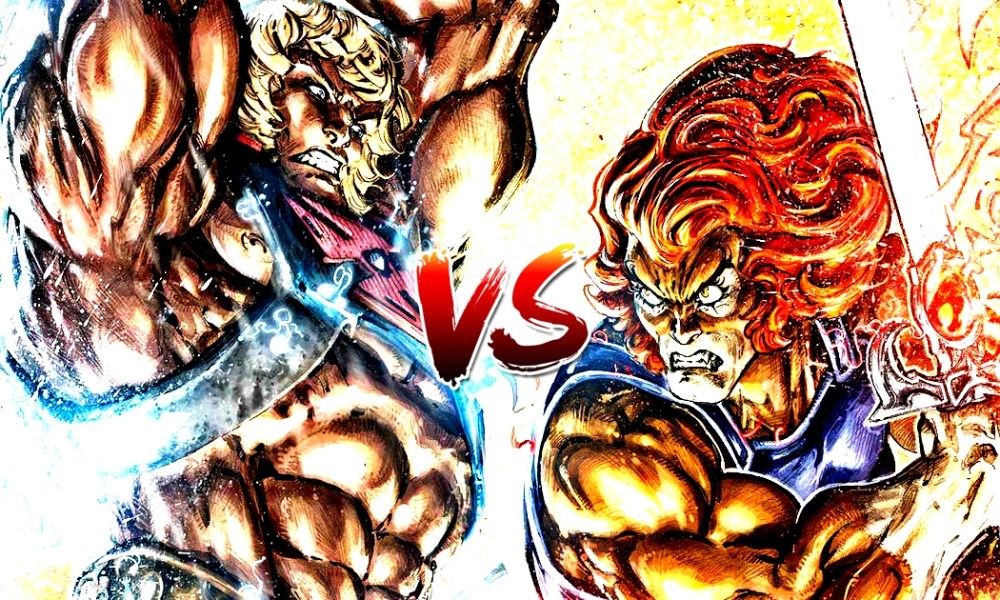 He-Man Vs. Thunder Cats: The Fight Of Your Dreams Is Here

When DC Comics launched the limited series He-Man/ThunderCats, they also promised all those who loved the cartoons from the 1980s that there will be a battle between the Master of the Universe and the Lion-O from Third Earth. It was a good premise. However, the series sprung quite a few surprises before the meeting between He-Man and Lion-O.

The chances of this face-off seemed remote because in one of the comics, He-Man…died. However, we were not going to be fooled with that one. Irrespective of the Royal Funeral, all the fans knew that He-Man would once again rise from the dead to glory.

In fact, DC even showed the He-Man raise the Power Sword high in the cover design for issue #3 which served as a spoiler. Thus, the battle is on, but, we need to find out which sword will be lifted victoriously after the battle is finished.

THE DEATH OF HE-MAN

The cosmic chaos that made the ThunderCats and the Masters of the Universe come on the same planet are being followed by us. This unlikely union happened because of their scheming villains Mumm-Ra and Skeletor.

The enemy of ThunderCats wanted the Prince Adam’s almighty sword to use against the Lion-O. When Mumm-Ra plowed his sword through Prince Adam’s chest, he only needed to invoke the Power of Grayskull to survive. However, he was denied the chance as that power was claimed by Skeletor. Thus, Adam died.

This is one victory which had been high on Skeletor’swishlist for a long time, and he further wanted to kill Mumm-Ra and then drink him (You can never trust Skeletor). He seemed to have succeeded as he took on the full Power of Grayskull and only Lion-O and ThunderCats were left behind to defend Eternia. However, the unibody forces of Skeletor and Mumm-Ra was too much for them. They stormed into Eternia along with the Ancient Spirits of Evil. 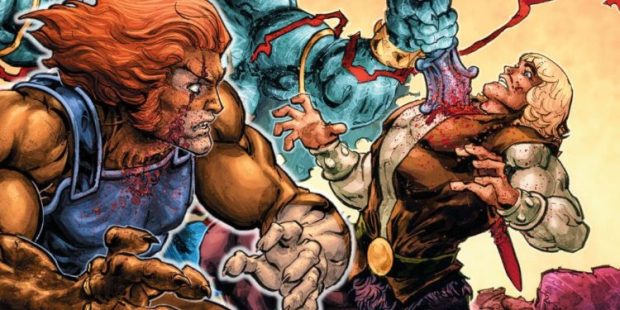 Lion-O then took a great chance, and he snatched Prince Adam’s coffin before boarding the ThunderCats spaceship. Lion-O escapes from the evil spirits that were destroying Eternia and goes back to his home planet of Third Earth which is also Mumm-Ra’s headquarters. With some optimism in his heart, the young king pushes the coffin into the Black Pyramid of Mumm-Ra. He knew that Mumm-Ra harnessed the magic of the pyramid – Lion-O rests Adam into it, closes it and waits. Soon magic happens, and Prince Adam is resurrected, however, with some unforeseen changes.

However, such side-effects were pretty much expected considering the usage of the demonic magician’s powers to revive someone from the dead.

How the Power of Grayskull belonged to both Adam and Skeletor remains unexplained, however, after Adam emerged from the dead with eyes like red burning coals, an animalistic roar and his murderous assault on Lion-O as soon as he saw him, are all extremely unusual.

His rage is only fuelled by the evil magic which resurrected him, and Lion-O faced a lot of trouble handling him. Finally, he took control of Adam’s sword, but, he didn’t comprehend the full scale of Adam’s physical strength. He lifts the iconic sword and calls out to the Eye of Thundera, “Give Me Power Beyond Power!” The mighty stone held within the Sword of Omens obliges.

With their powers matched, Lion-O and He-Man keep battling, and He-Man’s rage causes him to falter repeatedly. When Lion-O again orders the sword to give him “Sight Beyond Sight,” He-Man makes one last-ditch effort. This is the power which allows the ThunderCats leader to see anything that he wishes to see. However, when he pointed his sword at the eyes of the Prince, hoping that a vision of his loved ones will help control his rage, something unexpected took place.

He-Man didn’t see whatever was happening in Eternia, but, he had a vision of what will happen once Skeletor and Mumm-Ra are victorious. He regains his sanity and then the two plan their strategy combining the Sword of Omens with the Power of Grayskull and become friends. 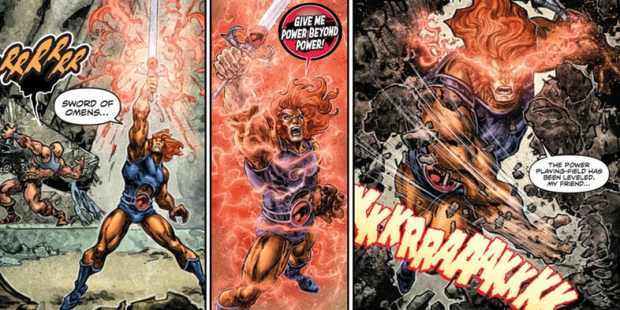 HE-MAN & LION-O – TOGETHER AT LAST

The issue closes with the two friends resolving to work together to protect their people and worlds. That’s exactly what most fans would have anticipated when this crossover started. However, we find that Prince Adam needs a lot of lessons about nobility and royalty because he is powerful and unbeatable.

Lion-O might be the right guy to impart that knowledge as he has managed to save and lead his people despite being uncertain himself and also had recently delivered a speech about a king’s responsibilities and that’s something which King Randor’s son must not have heard before.

Their friendship is also not early as the Ancient Spirits of Evil were surrounding the Castle Grayskull, and they were led by Mumm-Ra and Skeletor. They had begun to believe that they had finished their rivals, but, had no idea about the two royals and their powerful swords. There is no doubt that the next two issues are going to be a delight. 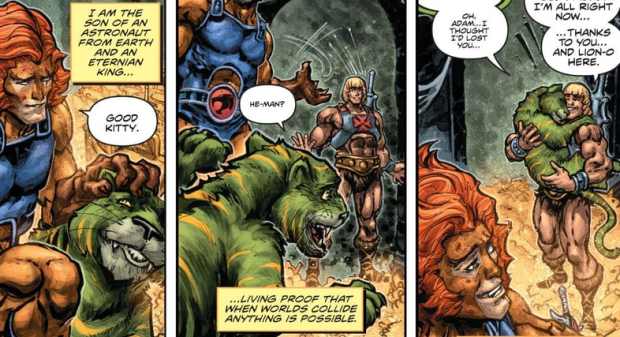