Here Is What Jon Hamm Could Look Like As Batman Here Is What Jon Hamm Could Look Like As Batman

With Ben Affleck possibly exiting the Batman role, some are looking to the future, and that could very well end up looking like Jon Hamm.

A previous report suggested that Jon Hamm is heavily interested in playing the Dark Knight, and if that were to happen it could very well look a lot like this rendering by artist Bryan Fiallos, also known as Bryanzap. Jon Hamm’s Batman features longer ears on the cowl and a smaller Bat-symbol on the suit and overall looks like a natural fit.

Of course, it is hard to be better than Affleck has been in the role, which Fiallos even admits to. “Jon Hamm as Batman, i like this casting. But Affleck is just perfect for the role.” 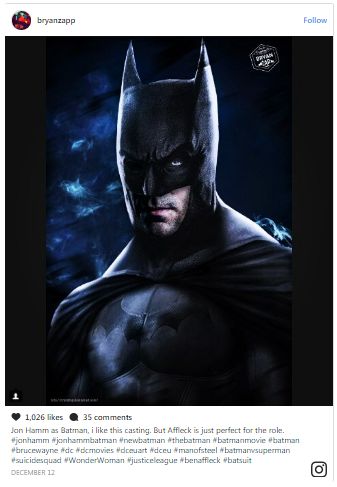 You can view the image of Jon Hamm’s Dark Knight above.

The Hamm casting report surfaced from a source close to Matt Reeve’s Batman project, who says Hamm is doing his best to campaign for the role. Hamm is friends with Affleck, but it seems he is on his way out of the DCEU at some point, and evidently, Hamm would gladly slip into Bruce Wayne’s shoes.

“They’ve enjoyed working together and have been on good terms ever since.” The source continued, “But Jon knows Ben has faced some criticism over Batman v Superman and Justice League and frankly thinks he’d be better suited for the job. This is business for Jon, not personal.”

Hamm has previously revealed he was in contention for several superhero movie roles but passed mostly due to the multi-movie contracts that come with most of them. Maybe Batman will be the hero to change his mind.

You can find more of Fiallos’ work on Deviant Art and Instagram.

Justice League is currently in theaters.