For those of us who have followed Game of Thrones, the best character is obviously Daenerys Stormborn of the House Targaryen, First of Her Name, the Unburnt, Queen of the Andals and the First Men, Khaleesi of the Great Grass Sea, Breaker of Chains, and Mother of Dragons. Before Jon Snow, however, there was Khal Drogo, her husband in the first season. Of course, their relationship was problematic AF at the start, and she did wind up tearfully killing him, but it would take a whole lot more space and time than we have here to unpack all of that. But what we’re really excited about is that the two reunited in London for what seems to be like a few gins, and they took a picture together, and my god, his arms it’s basically perfection.

Of course we’re referring here not to actual Khaleesi and Khal Drogo, but to human counterparts Emilia Clarke and Jason Momoa (who, two days ago, married Cosby Show actress Lisa Bonet!).
Clarke captioned the post with a reference to Khaleesi’s Dothraki nickname for Drogo, and my cold, icy heart is melting. 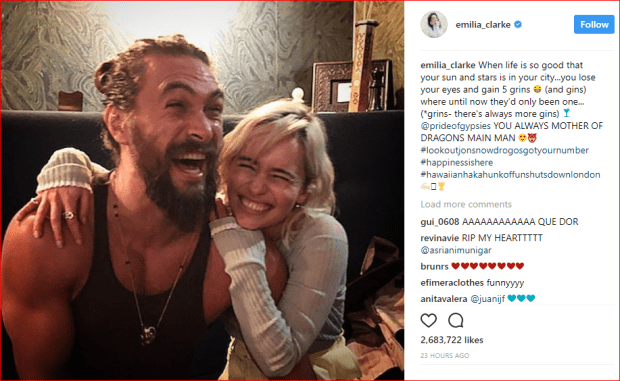 Momoa also added to the joy with his own comment: “You are and will always be the Moon of my life. What an epic night I miss you always Aloha Drogo”
Jenna Dewan Tatum was also as excited as we are, chiming in with a “YESSSSSSSSSSSSSS”.
These two are rays of sunshine in a dark bar, and we are so here for the reunion. With the last season of Game of Thrones currently underway and filming across in Northern Ireland, we are very much hoping for a few more pics like this before production wraps. And after. Definitely after, too.

AshishNovember 8, 2017
Read More
Scroll for more
Tap
The Night’s Watch WILL Be In Game Of Thrones Season 8, Confirms Lord Commander Actor
Amazon wants to turn Lord of the Rings into the next Game of Thrones