Production on the next two Avengers installments is winding down, and it looks like Scarlett Johansson is the latest one to wrap filming.

The actress’ stunt double, Heidi Moneymaker, recently celebrated the occasion with a photo on her Instagram account. In the caption, she proclaims “Well, that’s a wrap for us on Avengers!” and thanks Johansson for “an amazing year.” 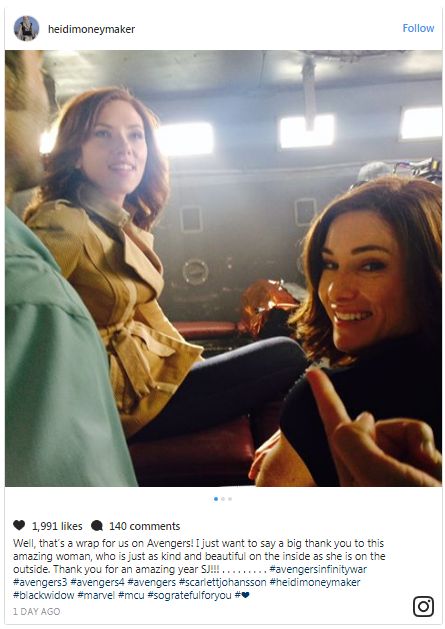 Interestingly, the behind-the-scenes photo shows Johansson in a pretty familiar set up – the street clothes she wears during the Lagos operation in Captain America: Civil War. Johansson is also shown with longer, brown-red hair, something drastically different from her blonde Infinity War do.

There’s a chance that Moneymaker’s photo was taken from behind the scenes of Civil War, and she’s just posting it to help keep up the secrecy of Infinity War and Avengers 4. But if the photo is from the set of those films, it could hint at something interesting.

Quite a few of Johansson’s Avengers costars have shared behind-the-scenes photos in recent weeks, some of which seem to hint at a sort of MCU-encompassing flashback sequence. Gwyneth Paltrow’s wardrobe seemed to indicate an Iron Man 3 callback, Evangeline Lilly was seen sporting her hairstyle from the first Ant-Man, and Paul Bettany’s Vision seemed to have the Mind Stone back from Thanos.

Granted, a flashback sequence is just speculation at this point, and there’s no telling exactly how it would unfold within the film. But either way, Johansson’s outfit in this picture certainly doesn’t hurt that theory. Avengers fans will just have to stay tuned to find out.