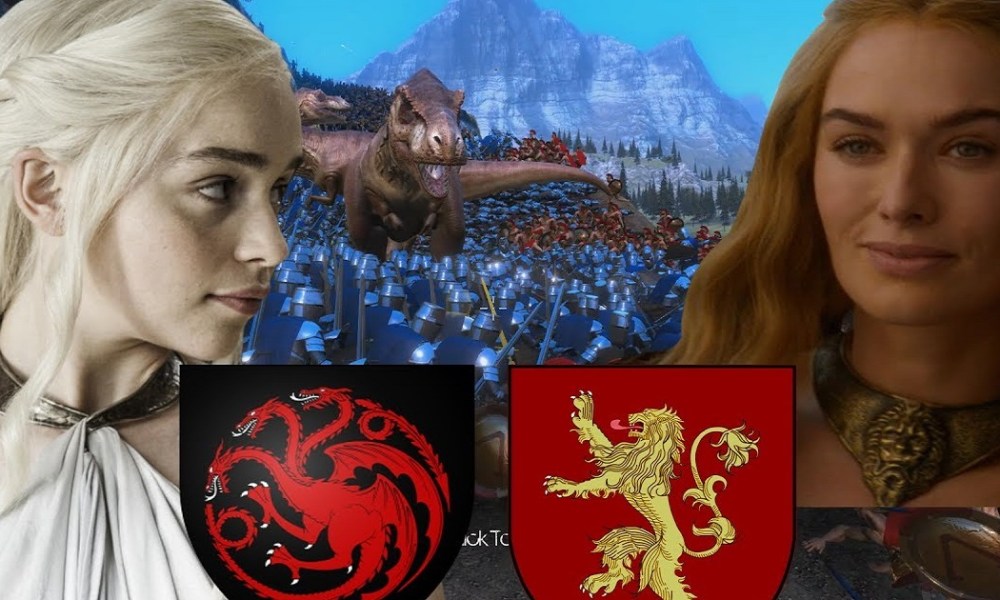 Filming for Game of Thrones Season 8 isn’t even a month in, and already, there’s a new set that has the attention of the fans. Interestingly, it’s not one out in the rolling hills of Northern Ireland, or on the plains of Spain where there may or may not be rain. Instead, this set is inside the wall of Titanic Studios. But it’s so large, the walls can’t keep it in. And details of the set are causing fans to think this might be for the Game Of Thrones Season 8 Dany vs. Cersei battle that we all suspect is coming.

We first noticed this set a couple of weeks ago, when an oversized trebuchet was seen sticking out over top the walls of Titanic Studios. Along with the weaponry, walls have also started to rise up to go with the siege engine, of what looks like the practical set for a castle gate. The walls themselves are very tall, but they’re unconnected in the middle, suggesting that they’ll be used as part of a set to be CGI’d into a large castle gate structure later on.

Then there’s the trebuchet, which is sized in such a manner that we’re guessing it’s meant to attack these very walls. 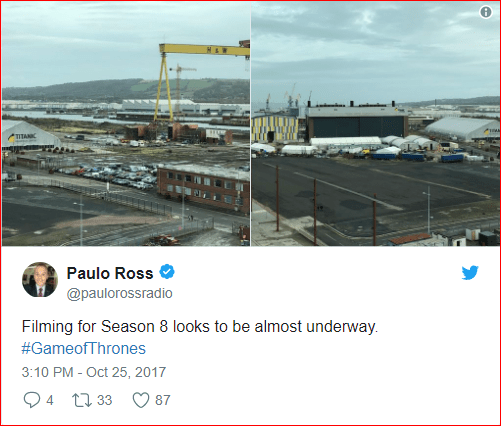 Here’s a close up of that castle shot. As for the trebuchet, someone caught a video of it in action recently, and it looks to be in good working order.

So, what’s going on here? And what set could this possibly be that’s getting attacked like this?

This set probably isn’t for Winterfell or Riverrun. Both of those castle sets already exist outside the Titanic lot, and are being worked on in order to be used in Season 8. Those are the ones were talking about when we say “sets out in the hills of Northern Ireland.” Riverrun is located near Corbet-Banbridge, and Winterfell is out in Moneyglass. Both have reported activity out in their locations. 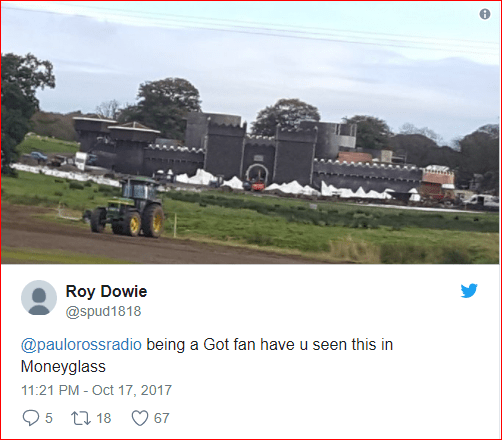 It’s also not King’s Landing, which has been filmed in Spain for the past few years, and will probably be filmed there again for the final season.

So, where is it? Well, a eagle eyed Twitter used caught a very interesting set piece lying on the ground readying to go up on the castle walls. Dragon heads. Those aren’t wolves, they’re dragon heads. Dragon heads to perch on a castle made of square walls. Most of the walls in Westeros are rounded. (It’s why the gears in the opening credits work so well.) Only High Garden and Dragonstone have square.

Taking all these clues together, it looks like this just might be the practical set for Dragonstone, a location that, up until now, was almost completely crafted via CGI from the outside.

It also fits the height of the walls they’re building. Dragonstone’s entrance, as we might remember from Dany’s arrival there last year, is very imposing.

But there’s just one problem. Dany isn’t home at Dragonstone. With only six episodes, it seems really strange she would go back home. She’s taken her entire army and headed North to fight the Night King. (And to discover, to her horror, that her new lover is not only her nephew, but his claim to the Iron Throne outranks hers.) So why would Dragonstone be under siege?

Because Cersei said to Jaime that’s exactly what she was going to do while they were gone. She’s sent Euron to hire the Golden Company. The casting calls for Season 8 all but confirm they’re casting Golden Company leaders. This trebuchet live action stunt looks to be part of the weaponry they’ll be bringing with them.

Could that be true? Could one of the episodes this season feature Dany having to turn tail and ride Drogon back to Dragonstone to put out the fire that developed behind her? Will she take the opportunity to lick her wounds now that she’s not actually the heir to the Iron Throne? (Could Daario be the leader of the Golden Company, and give comfort to her while she and Jon “Aegon Targaryen” Snow are on a break?)

Game of Thrones Season 8 won’t be back until 2019 most likely, so until then we’ll just have to wonder and wait.

AshishNovember 8, 2017
Read More
Scroll for more
Tap
Amazon wants to turn Lord of the Rings into the next Game of Thrones
A Mystery Character Might Be Returning For Game Of Thrones Season 8!