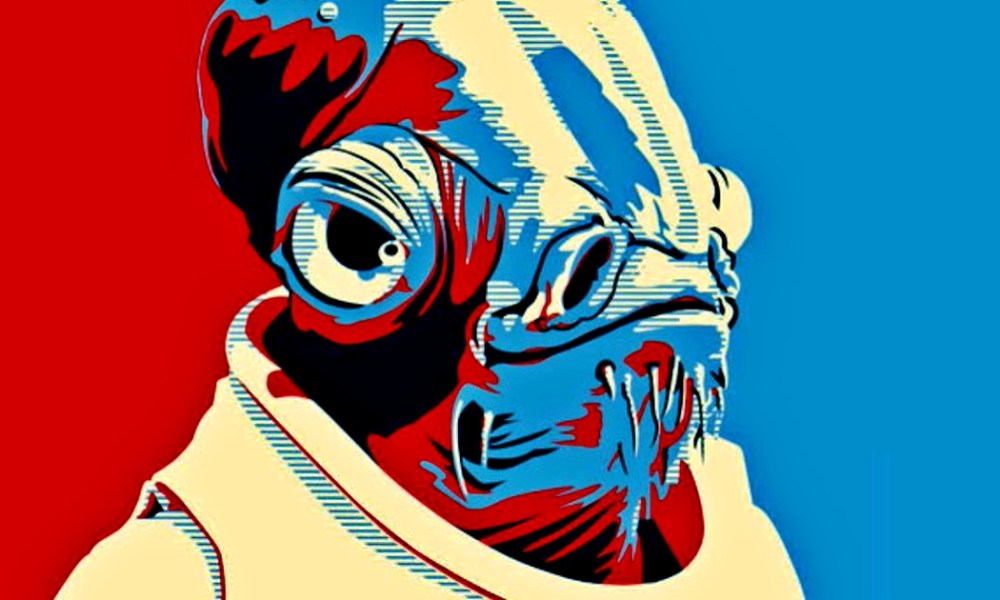 As witnessed during the events of The Last Jedi, Gial Ackbar, known as Admiral Ackbar, has died. The former Rebellion hero and Resistance leader has been killed in a conflict with the First Order during the evacuation of D’Qar, sources have confirmed. Ackbar’s death has left the Resistance without a key member of its leadership. Here’s what official sources had to say about the attack.

“When the Resistance was forced to flee D’Qar, Ackbar commanded the fleet, serving aboard the Mon Calamari heavy cruiser Raddus. The Alliance hero was killed, along with many of his fellow officers, when a First Order torpedo ripped through the ship’s bridge.”
Gial Ackbar was born on Mon Cala and eventually rose through the ranks to become captain of the Mon Calamari Guard. His leadership came at a crucial time during the Clone Wars when Mon Cala’s king, Kolina, was assassinated. It was Ackbar who warned the Jedi Council of the impending civil war on his homeworld of Mon Cala, between the Mon Calamari and the Quarren, which was engineered by separatist warlord Riff Tamson.

Ackbar was tasked with protecting Kolina’s heir, Prince Lee-Char, and reluctantly, but heroically, led him into battle against the Quarren, who were led by Tamson, in a brilliantly executed counterattack. Though successful in their counterattack, Ackbar proved his worthiness as a leader by warning against being too confident and, not long after, the Separatists attacked the oceans of Mon Cala. Ackbar encouraged Prince Lee-Char to retreat and, after a difficult battler and alliance with the Quarren, which resulted in Tamson’s death, Mon Cala was freed and Lee-Char took his place as king.

His time spent with the Jedi and the Republic in the Clone Wars would years later lead to Admiral Ackbar joining up with the Rebellion, becoming a key figure in defeating the regime led by Emperor Palpatine. Ackbar and his fellow Mon Calamari were instrumental in helping the Rebellion during the Galactic Civil War, providing ships and troops to the Rebel Alliance. Ackbar was a key figure in the evacuation of the Rebel base on Yavin 4 and helped scatter the fleet, so that the Empire couldn’t easily snuff out the Rebellion.

Following the battle of Hoth, Ackbar warned the Rebellion that the Empire was building a second Death Star that wouldn’t be vulnerable like the first one, once complete. Ackbar was instrumental in planning the attack against the second Death Star while it was still under construction, eventually leading the battle, along with Lando Calrissian.

During the attack, it was revealed that the weapons on the battle station were quite operational, threatening the entirety of the Rebel fleet. With Star Destroyers in place to stop the Rebel fleet from escaping, Admiral Ackbar was quick to detect this elaborate ruse, announcing it to the fleet in a pivotal and memorable moment.

Admiral Ackbar felt a retreat was necessary. However, he ultimately agreed with Calrissian to attack the Star Destroyers while the ground team on the forest moon of Endor took down the shield generator. This heroic effort allowed for the Death Star to be destroyed once and for all.

Following the victory, Ackbar was promoted to the rank of Grand Admiral and helped fight the war against the remaining forces of the Empire. Under his leadership, the Rebellion won many battles, including the Battle of Jakku, which led to a signing of a peace treaty between the New Republic and the Empire. With the war seemingly won, Ackbar retired to Mon Cala.

After Leia Organa’s bid for chancellorship in the New Republic failed, she managed to convince Ackbar to come out of retirement and he was given a key position within the ranks of the newly formed Resistance. As the threat of the First Order continued to grow, Ackbar proved to be a very powerful ally, as his years of military service helped them win key battles, including the assault on Starkiller Base.

Given the current, shattered state of the Resistance, Admiral Ackbar could not be given the proper funeral service he sorely deserved. However, his years in service to the galaxy will never be forgotten and he will be impossible to replace. RIP, Admiral Ackbar.