GET A GAME OF THRONES BTS LOOK AT ZOMBIE POLAR BEAR, FLAMING SWORDS AND VISERION 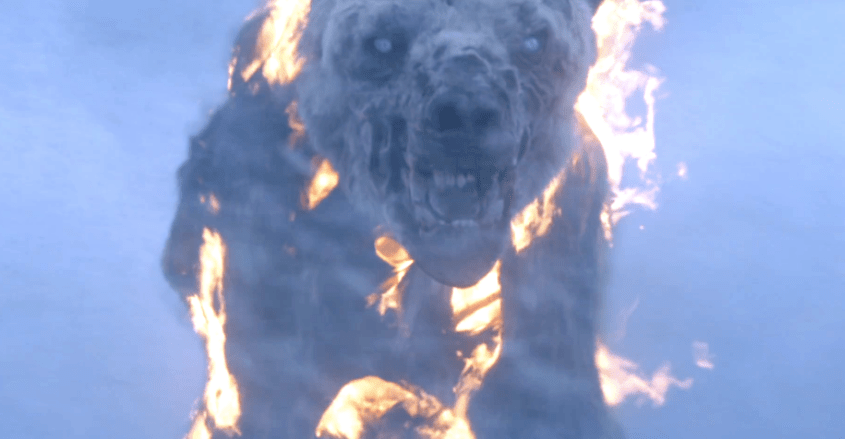 GET A GAME OF THRONES BTS LOOK AT ZOMBIE POLAR BEAR, FLAMING SWORDS AND VISERION

Ever since the epic seventh season of Game of Thrones concluded over a month ago, HBO has been regularly feeding us with cool BTS videos titled “The Game Revealed,” with the latest installment putting the spotlight on the awesome “Zombie. Polar. Bear.” of Episode 6.

“It’s very much like a shark attack,” Bauer said of the nail-biting scene in which the bear attacks Jon and the rest of the gang. The bear was an amalgam of a guy in a green suit, impressive VFX, and real flames — just like the swords used by actors Richard Dormer (Beric Dondarrion) and Paul Kaye (Thoros of Myr) were really on fire, as you can see below. (Dormer previously said he had to run around with a real flaming sword for the episode.)

However, the zombie polar bear wasn’t the only thing that stood out in “Beyond the Wall.” By the end of the episode, one of Dany’s (Emilia Clarke) dragons, Viserion — who had been killed by the Night King — returned as a Wight, and you can now have a look at how it was done:

Game of Thrones is expected to return for a very expensive eighth and final season sometime in late 2018 or 2019.

AshishNovember 8, 2017
Read More
Scroll for more
Tap
GOT Star Slams ‘Really Stupid’ Plans For Show’s Ending
Jon Snow May Be A Wight, And Must Be Killed According To A Interesting Fan Theory!