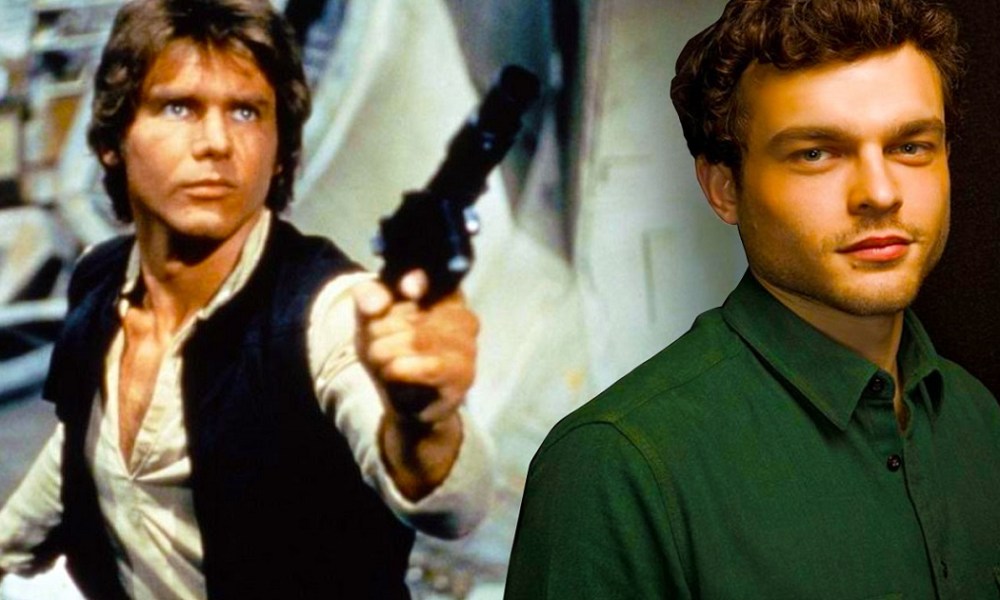 Despite Ron Howard’s frequent updates to social media teasing characters, props, and sets for Solo: A Star Wars Story, fans have yet to see the smuggler himself as he’ll appear in the film.

But a new promotional cup from Harkins Theaters shows Alden Ehrenreich as Han Solo, standing alongside Chewbacca, and it just might make even the die hard Star Wars fans swoon for its accurate depiction. Take a look below. Though the pilot of the Millennium Falcon has had a few different appearances over the course of the Star Wars saga, there are a few trademark elements to the Solo look: dark pilots jacket, light colored shirt underneath, and swagger. Lots of swagger.

Another image of the cup shows the smuggler’s famous ship flying in the background. Check it out: Though this is obviously an artist’s rendition, that swag appears to be present in full in Ehrenreich’s appearance. Just look at that hair! It’s like even more retro than Harrison Ford’s appearance in Star Wars: A New Hope, almost with a ’60s vibe, which makes sense considering the original film came out in 1977.

While this might not be the reveal Lucasfilm or Howard were expecting for their lead character, it’s likely more accurate than not.

Harkins Theaters releases a yearly souvenir cup, giving movie goers the chance to get discounted soda for the entire calendar year of films if they bring it with them. With 2017 set to bow and 2018 on the horizon, it makes sense that their new cups would start hitting theaters.

The cups always feature an eclectic mix of the year’s biggest blockbusters, and as you can see, Gamora is standing right behind him to represent for Avengers: Infinity War.

But Harkins could also be going off of old assets, and a lot could have changed between the time Phil Lord and Chris Lord departed the project and were replaced by Howard as the new director.

Does this mean Lucasfilm will rush their own official reveal of Ehrenreich’s take on Han Solo so as not to sour fans with a drawing on a cup? While one can hope, it’s not likely. Few things push Lucasfilm outside of their comfort zone, and our first official look at the character might not come until the first trailer debuts.

But considering Solo: A Star Wars Story is set to debut on May 24, 2018, we might get that trailer sooner than later. Isn’t Star Wars: The Last Jedi supposed to be coming out soon?