Every Star Wars fan had been on the lookout for Luke Skywalker…’s tweet?

The tweet in question is the one that Mark Hamill had posted in response to a fan’s question asking about the next Star Wars: The Last Jedi trailer. In that tweet, the star had recommended that the fan should watch the October 9 Monday Night Football game between the Chicago Bears and the Minnesota Viking for the same. Later he promptly deleted that tweet.

While he attempted to erase the marks and tried to laugh it off as just a quirky joke, the confirmation has since been received that the trailer will indeed be revealed during that NFL game in about two weeks from now.

A fan told Hamill last week that the time was ideal for them to come out with a new trailer for the upcoming movie and Hamill tweeted in response, “Watch Monday Night Football on Monday, October 9th – for no reason in particular.”

This caused quite a sensation, and although, he deleted it, the Tweet had already gone viral, and fans repeatedly questioned him about why did he delete it and wondering whether he was reprimanded by Lucasfilm. Hamill attempted to look unperturbed and passing it off as a joke which nobody understood. 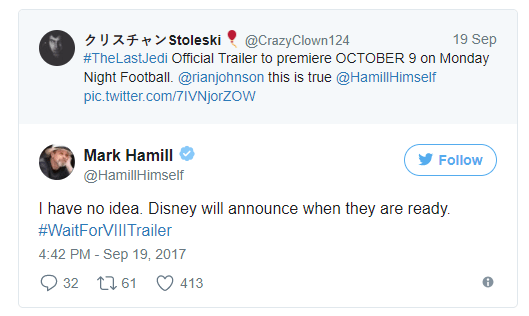 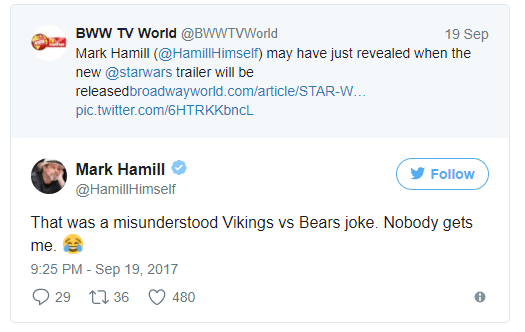 However, it has now been confirmed that the much-awaited trailer for Star Wars: The Last Jedi is undoubtedly going to release during that game between the Vikings and Bears.

It is something that is not unique to this film as earlier too Star Wars trailers have been released during the Monday Night Football. Before this, Star Wars: The Force Awakens also had its second trailer released during such a telecast.

Disney owns Lucasfilm as well as ESPN and NFL is one of the most watched programs for them. Thus, it is quite a sensible thing for the film to benefit from the high viewership of the sport and try to increase the same by linking Star Wars to it.

This will also give them a chance to divert the attention of the viewers after several players have protested against planned violence against people of color and mixed response that such protests have evoked from lots of fans that included the President Trump.

Nothing has the potential to unite people better than this saga of space wars and the battle of good v evil which will be promoted during a 60 minute on field physical faceoff between two teams. Right?

AshishDecember 31, 2017
Read More
Scroll for more
Tap
8 Most Powerful Sith LADIES Of Star Wars Universe!
‘The Last Jedi’ Will Be The Longest Star Wars Film Ever!