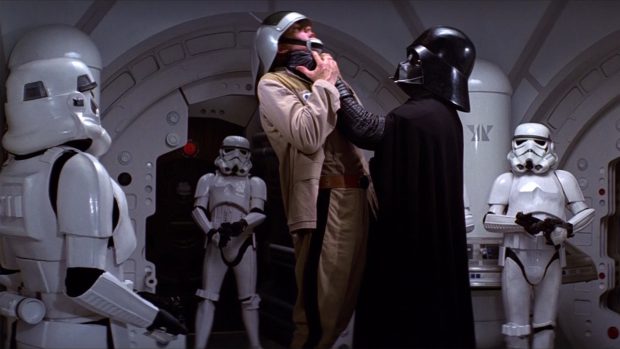 Over the weekend, director Peyton Reed took to Twitter and asked for something that all the Star Wars fans have been asking after George Lucas re-released the original Star Wars trilogy. He wants Lucasfilm to finally release the unaltered version of the original movie on Blu-ray. 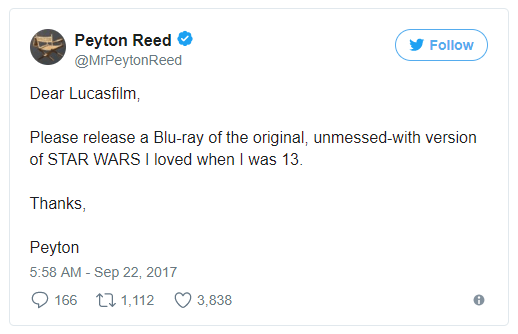 George Lucas considered each iteration of the special editions as the definitive version of the movie with changes every time the trilogy was released. He insisted that special editions were the movies he originally had in mind and in 2004 he said that he would not re-release the unaltered versions on DVD.

“The special edition, that’s the one I wanted out there. The other movie, it’s on VHS, if anybody wants it. … I’m not going to spend the, we’re talking millions of dollars here, the money and the time to refurbish that, because to me, it doesn’t really exist anymore.”

He eventually released the cuts on DVD for a limited time in 2006 with 2004 special editions. There are many available on eBay if one wants them. The films did not arrive on Blu-ray till 2011, a year before he sold the franchise to Disney.

But that was five years ago. Why hasn’t Disney and Lucasfilm released these films? Well, they cannot. 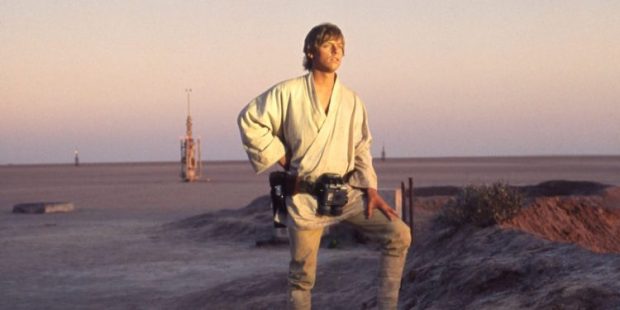 Like Disney cannot have Marvel Studios make an X-Men film, it is an issue of rights. Specifically that 20th Century Fox which distributed the 6pre-Disney Star Wars films still owns rights.

The reasons for this are about to how Star Wars was made. Before the first movie, franchising was not a thing and because Fox had some doubts about the success of Star Wars Lucas was able to keep all rights to sequels. Then Star Wars became a great success. 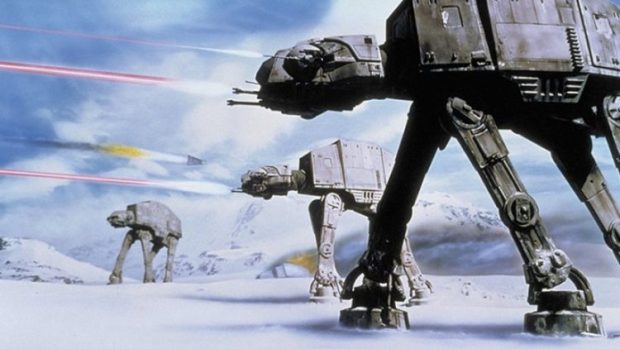 According to Tom Pollock, Lucas’s lawyer, Fox wanted a sequel, but because Lucas owned rights to a sequel. According to Pollock, the same deal between Fox and Lucas was made for Star Wars films.

But because the first film was paid for by Fox, everything belongs to them.

There is nothing stopping Disney from remastering the original cuts of Empire and Jedi.

One of the rumors said that Disney could not go back and retcon anything George Lucas was involved in. The EU was fair game since Disney had disavowed everything that was released before it purchased the franchise.

When asked about it at this year’s Star Wars Celebration in Orlando, Lucasfilm head Kathleen Kennedy shot down the idea that she would attempt to make changes to Lucas’s work:

“I wouldn’t touch those, are you kidding me? [laughs] Those will always remain his.”

For now, you’re stuck with the DVD quality versions or the legally-dubious fan fan-made ‘Despecialised Editions.’ Just one word of advice, don’t watch the DVDs with a 4K upscaling enabled. They look like shite. And so do the prequels.