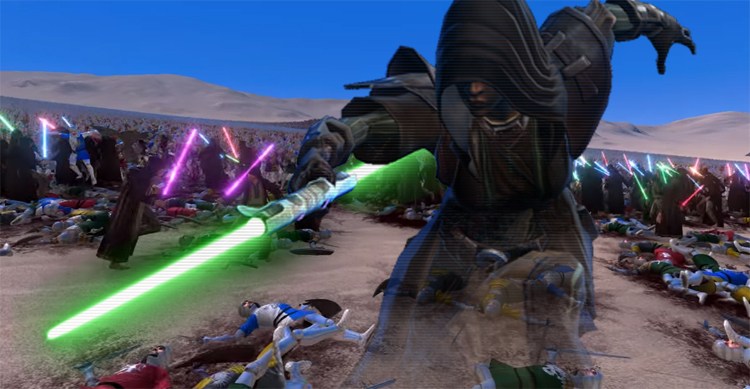 Jedi Knights were some of the most feared combatants in the Star Wars universe. So what kind of damage could they do if you got 300 or so of them together?

Probably not much, honestly, if only because they don’t take the idea of “doing damage” lightly. But what if they were surrounded by 60,000 or so medieval knights? Then what happens?

Well, based on one YouTube user’s simulation, the Jedi would wreak total havoc. YouTube User SergiuHellDragoonHQ used a video game called Ultimate Epic Battle Simulator to reveal the results of exactly that scenario.

Despite being outnumbered 200 to 1, the 300 Jedi knights are able to destroy the 60,000 medieval knights. That just goes to show you what a highly trained army equipped with laser swords and capable of telekinesis is capable of doing. You can see for yourself in the video above.

This is just one such epic battle that SergiuHellDragoonHQ has simulated and recorded using Ultimate Epic Battle Simulator. He has a whole series recorded using the same game, including 1,000 German soldiers vs. 40,000 Persians, 1,000 T. Rex vs. 100,000 zombies, and 30,000 Jedi vs. 30,000 Chuck Norris. If you need to know the results of those, check out SergiuHellDragoonHQ’s YouTube Channel.

Star Wars has never really shown fans what so many Jedi gathered together could do in any of the films. This is for obvious reasons in the original Star Wars trilogy, given that there are only a couple of Jedi even alive.

However, the prequel trilogy took place at the height of the Republic and the Jedi Order, meaning there were plenty of Jedi knights to go around, and yet the closest they got to a truly epic Jedi group battle was Mace Windu leading Jedi and clone troopers into the arena on Geonosis in Attack of the Clones. Somehow, that scene didn’t quite live up to expectations.

Don’t lose hope though. If Rogue One: A Star Wars Story can provide fans with a chance to see Darth Vader cut loose, who knows what future Star Wars movies may have in store?