Lindsay Lohan Campaigns for the Role of Batgirl on Twitter Lindsay Lohan Campaigns for the Role of Batgirl on Twitter

Lindsay Lohan wants to star in Joss Whedon’s Batgirl and has taken to social media to start a campaign. Warner Bros. just recently gave the DC movie universe a major shakeup by naming Walter Hamada as the studio’s new president. Hamada will be the man in charge of making decisions on what projects do or do not make it to the big screen, and he’s got a long list of ones to consider. We know Aquaman, Shazam!, and Wonder Woman 2 are definitely happening. Current indicators point to The Batman, Flashpoint, and Suicide Squad 2 also being priorities for the studio, but that could now change with Hamada on board.

One of the projects that Hamada will need to figure out is Batgirl. The previous management team had started developing it after Whedon’s pitch, and early word on the project made it look like production could begin quickly, but things appear to have slowed down. If it does move forward, Mean Girls star Lindsay Lohan wants the leading role.

Lindsay Lohan took to Twitter this morning to start campaigning for her to play Barbara in Whedon’s Batgirl. She is asking her faithful followers to retweet the post so it can gain more support, and she tagged Whedon in the post to try and maximize the chance of him seeing it. 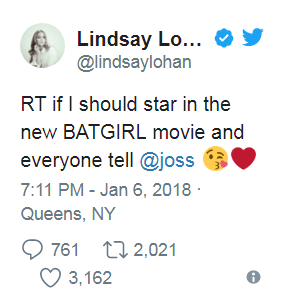 Lohan used to be a much bigger name than she is today, so a leading role in Batgirl could certainly help revive her career. After starring in Parent Trap, Freaky Friday, and Mean Girls (to name a few) in her younger days, her personal life and struggles largely sidelined her as an actress. Nowadays, she mostly sticks to TV when she does act, so this would clearly be a big jump for her to make now. She may have been a good choice for the role ten years ago, but possibly not with the current DC lineup.

Details on Whedon’s vision for Batgirl are slim, but it is said to be inspired by the New 52 version of the character. By the time Batgirl gets around to filming, Lohan would probably be a bit older than desired. Rising young actress Hailee Steinfeld has expressed interest in the role, while someone like Jane Levy has been a fan favorite. Lohan could fit the character if they make her more experienced, but there’s no telling if that’s the direction they’ll take. Plus, Whedon mentioned early on he’d prefer getting an unknown actress to lead, which Lohan certainly is not. At the end of the day, Lohan is probably a long shot to get the role, but maybe that will change if this campaign picks up steam.

AshishJanuary 28, 2018
Read More
Scroll for more
Tap
Spawn Reboot Is a ‘Supernatural-Thriller,’ Not a Superhero Movie
‘Guardians Of The Galaxy Vol. 3’ To Be Released In 2020