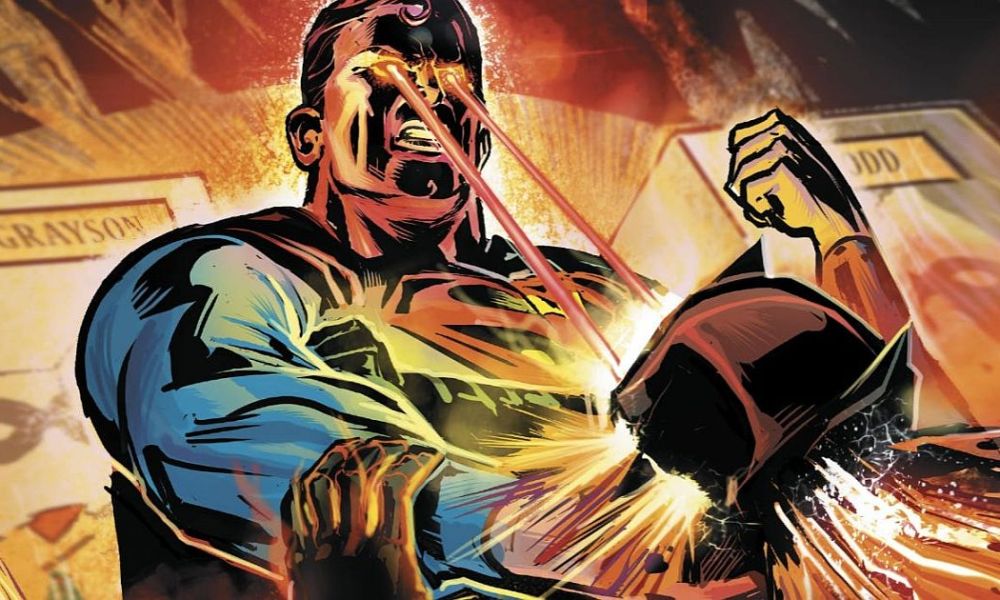 WARNING: This article contains SPOILERS for Nightwing: The New Order #5

Nightwing: The New Order shows what happens when Superman finally kills Batman – basically, the end of the DC Universe as we know it. If casual fans think we’re exaggerating, then it’s actually Dick Grayson who is being underestimated. He’s been the star of New Order since the beginning, but only now has the secret cause of his shift from superhero to government soldier been revealed. He may have acted as Bruce Wayne’s more compassionate, and diplomatic partner… but when Superman killed the only man who could stop him, it was Nightwing who brought an end to the age of superheroes.

Fans will want to know that specifics around Superman’s murder of Batman (he really does do it in New Order‘s future), and how writer Kyle Higgins makes that act the turning point in Dick Grayson’s life. It didn’t just cost him the closest thing he had to a father. With the way New Order is going, it may cost him his own son, as well.

Once the shock of seeing an armored, bearded Superman of the future wears off, the Man of… regular flesh gets a chance to talk to Jake Grayson, Nightwing’s son. Since Superman is the most iconic superhero to lose his powers, and Jake’s father was the hero who actually deployed the power-negating weapon, it’s their first topic of conversation. But Clark doesn’t hold any grudges, even revealing that the weapon itself – an Apokoliptian device that Darkseid used to conquer worlds without their heroes – was in Batman‘s possession. And more importantly, that it was Dick Grayson who first convinced Bruce Wayne not to use it.

So, what was it that finally pushed Dick to reconsider, and wipe out superhumans en masse? Jake chooses not to say it in front of Superman, but both know the answer. That’s right, Superman killed Batman with an incinerating blast of heat vision. And if that description doesn’t conjure up enough imagery on its own, readers will be pleased to see that Trevor McCarthy and Dean White’s illustration of the event isn’t easily forgotten.

And for all their differences leading up to the tragedy, the death of Bruce Wayne by Superman’s hand (eye?) convinced Dick Grayson that extreme measures were needed. He deployed the superpower bomb in Metropolis, and DC’s future began its march towards a police state that would rather put superhuman citizens in suspended animation than allow them to walk the streets. 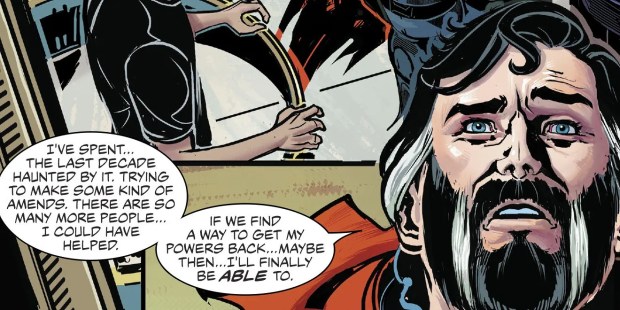 Politics, anger, and feelings of powerlessness were what caused Batman and Superman to fight in Dawn of Justice, but not in New Order‘s story. It’s actually Jake who swoops to Superman’s defense from himself, pointing out that Batman’s murder isn’t the only word that spread. He knows it was “mind control” that was really to blame, as is usually the first explanation thrown around comic book circles whenever a superhero acts recklessly. Lex Luthor steps in to clarify that the true culprit was “Black Kryptonite,” a substance previously used to separate Superman into good and evil ‘versions’ in both Superman IIIand Smallville. Lex also points out that his alliance with Superman and the superhuman resistance is unrelated. He didn’t deploy the Black Kryptonite, and it seems fans may never find out who did.

It’s a testament to Superman’s heroism that his regrets aren’t just for killing his friend, but for the fallout. And not even the loss of his own powers or those of his fellow superheroes – but the countless innocents that he would no longer be able to help, protect, or save. For the record, we would say Superman still proved his character by strapping on armor, and Wonder Woman’s sword and shield to keep fighting the good fight. Yet Superman seems determined to make some kind of greater amends for his role in The New Order‘s future.

IS BATMAN’S REAL KILLER STILL OUT THERE? 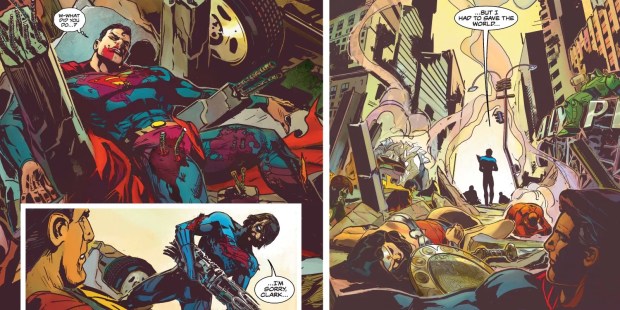 Most fans who read that breakdown of Batman’s death will be asking the same question: who exposed Superman to the Black Kryptonite then? It’s that lingering question which the comic seems to dodge completely – which in the world of comics, is reason to devote even more energy and curiosity towards it. After all, it’s the one act that made the New Orderfuture possible – and the planning needed to fill in the blank between ‘expose Superman to Kryptonite’ and ‘kill Batman’ seems important. And if Dick Grayson, Superman, and Lex Luthor all know that Dick found the power-erasing weapon in Batman’s own armory, is it plausible someone else could have known it was there?

Kate Kane a.k.a. Batwoman has flirted with more extremist methods (and even Bat-murder) in her own Rebirth story, and the version seen in New Order‘s future is no less formidable. But could she really sacrifice her own cousin, Bruce Wayne, to wrestle the world back into human control? Kyle Higgins has ensured that the world of the New Order‘s police state is filled with enough shadows to conceal almost anything. Who knows, maybe it was Bruce Wayne behind the entire thing, sacrificing himself to change Dick’s mind (if not outright faking his own death and living out the rest of his life in secrecy)? But we wouldn’t bet on it… for Alfred Pennyworth’s sake, at least.

With just one issue left in Nightwing: The New Order‘s story, Superman might get the chance to tip the karmic scales back in his favor. That may mean a sacrifice most fans won’t be ready to see play out, for either Lois or Clark. But with the son of Nightwing and the future of superhumanity on the line… well, let’s cross that bridge when we get to it.